I grew up on the ski hill. As soon as I could stand, skis were strapped to my feet, the tips were held together by wire to force a snow plow, and I would just lean on a wooden dowel with ropes on either side. Skiing wasn’t as fancy 30 some odd years ago as it is today! Growing up, if I took a day off or would get to the hill late my Grandmother would always say, “You missed the just the best day of skiing.” In her mind everyday on skis was the best day ever. As a kid, I felt the same, but as an adult I’ve discovered not every day is THE BEST day. While a bad day on the slopes always beats a good day in the office, there were almost a dozen standout days in 2020 that definitely compete for the title of Best Day Ever.

It was only our earliest opening day in history! Thanks to everyone who came out. Winter starts now! ❄️❄️❄️

As everyone remembers, winter came on strong in November 2020. At the Toronto Snow Show, the stoke level was high with whispers and rumours of early openings. Just 10 days later Blue Mountain was ready to welcome our Passholders back to the earliest opening in recorded history.

We're snow excited, and we just can't hide it. 🎵 The North is open today. Hike N Tube opens Friday, The Orchard opens Saturday, plus we have both the Grove and L-Hill parks opening Saturday (Badlands coming soon), AND the Bullwheel is open for après all day! 💁 🍻 @GoPro @Stokedcom

Ontario pow days are the stuff dreams are made of. Any time I get a snow squall weather alert, I’m already picturing six foot snowbanks, and fresh fluffy laps in the Orchard. We usually don’t get those days until late January, or early February, but December gifted us with a massive pow day equivalent to a toddler shaking a snowglobe! Due to the poor road conditions, it was locals-only and boy did we party!

We spent the morning going from South to North and the conditions are ALL TIME! This weekend is going to be the perfect way to kick off the holiday season, with over 41cm of FRESH snow this week alone, we will have 30+ trails open this weekend, 2 Terrain Parks and Hike N Tube.

It’s always darkest before the dawn and in this case, after a full 24 hours of intense snow, we were hit with -20 temps, bright blue bird skies and perfectly groomed corduroy. As a Blue Mountain employee, we have certain perks. On this morning, the entire Marketing team felt that it was time to “test the product.” We headed out at first chair, rode perfectly groomed corduroy from South to North and back. It goes down as one of the most fun impromptu days on the mountain. It ended with a team “board” meeting at South Base Lodge with some Egg and Rides and Coffee Crisp Mochas (because, we’re fancy).

November 1st means one thing in my house: the Christmas tree is up and we only watch the Hallmark channel for the next 60 days. In short, I am OBSESSED with holiday magic and joy. I am aware that not everyone shares my Kringle spirit but when over 350 Santas, Elves, Reindeer, Nutcrackers, and the odd Grinch or two, show up to take part in the first ever Santa Ski, it was everything I had hoped for and more. All I needed to complete the fairytale was a fun meet-cute where a hardcore skier trades his sticks for a snowboard, falls desperately in love with me, and of course is a Prince of a small country I’ve never heard of.

The best way to spread Christmas cheer is skiing and boarding into the new year! The inaugural Sleigh The Slopes was a great success, and left our hearts growing three sizes too big. 🎄 🎅 🎁 ☃️

Between January 15th and 16th from 10pm to 7am, we were met with a dumping of snow, which means fresh tracks in the morning! The groomers were away by the time the snow stopped and the temperatures stayed in the -20 region so it was too cold to turn the fluff from light to heavy. Is there anything better than looking like the Abominable Snowmonster from too much POW?

Want to ski/board Blue between midnight and 6am? Well that's exactly what you get to do at @24HBlueMtn, join in on the 24 hour relay in support of the Special Olympics. Sign your team up today! Feb 22nd-23rd 2020.

I think this is pretty self explanatory. When else are you able to ride between midnight and 5am? It’s a pretty fun experience when you get to see the bar-goers crawl home while you’re still lapping in support of a great cause. Sleeping on the floor of the GCL never looked so appealing.

I can’t say much about this other than a select few of us got to spend the entire day with two Canadian legends that “Keep Fit and Have Fun.” You’ll see more of this come December.

We're slashing POW and Prices! We are in the final stretch to save on Adult Midweek 8-Hour tickets! Available for use on a day of your choosing, Monday to Friday between March 2 and 13. @GoPro #GoPro

All good things come in threes: Musketeers, Stooges, Amigos, Heathers, Supremes, Beastie Boys, Snap Crackle and Pop….well you get the idea. On the leap year, no less, we were gifted with not one, not two, but THREE Pow Days. It was a Thursday, Friday and Saturday. Thursday our office was empty. Everyone was on the hill in desperate need of pow. Scared that we would be tracked out by noon, I was at first chair. I spent the next 3 hours laughing, slashing and having the time of my life. I was pleasantly surprised by the condition of the snow in the late evening. It just kept snowing and the accumulation on-hill stayed strong. Friday rolled around and the snow had let up. While Thursday was mid-thigh deep, Friday was mid-calf, and still awesome. The real surprise was on February 29th, our leap year day, when the snow was back to mid-thigh and I was lucky enough to get on Southern Comfort just as patrol had given an all clear. It was 8:15am and myself and two friends got four uninterrupted private laps down Sunrise as the groomer was trying to push out Burner so the slide-slipping Race team could set the gates. I also got to witness a friend’s daughter get her first taste of pow. She was less than stoked as it was eye level for her and she kept disappearing from sight.

We're slashing POW and Prices! We are in the final stretch to save on Adult Midweek 8-Hour tickets! Available for use on a day of your choosing, Monday to Friday between March 2 and 13. @GoPro #GoPro

While these memories are my “You missed the best day of skiing ever,” I am sure each and everyone of you have your own. We miss winter and can’t wait to welcome it back. When the snow hits, don’t forget to tag us @BlueMtnResort when you share your #BestDayAtBlue photos. 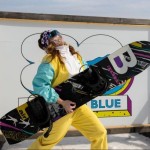 Resident Gryffindor of the Marketing Team, combines her passion for the outdoors with her love of rule following to help you get the most of your Blue Mountain experience

View all posts by Melissa Kurtin →